I hadn’t realised how long it’s been since I wrote anything here. But in many ways not a lot has changed. The lockdown goes on and on which is not surprising but is very hard to live with. The weather has continued to cause much frustration; it has been almost continually wet and now we’re having another week of icy weather. My list of things to do while forced to be at home has all been done and I’ve resorted to wasting time doing jigsaw puzzles.

There were a few days when Sarah was able to come and move the two loads of woodchips onto the weedy area under the trees by the front hedge. While she was busy doing that I squelched my way into the garden to cut back a few things. We also dug some new drainage channels. When we first came here we dug drains all through the garden but over the years they began to get clogged up and had stopped working so it’s good to put some new ones in. It’s an impossible job to do without getting mud everywhere and generally making a mess.

Today might be the last of a full week of temperatures at or below freezing, tomorrow is due to be much warmer. Time will reveal how many plants have died due to being waterlogged and/or frozen. In the winter of 2010/2011 I had to dump trolley loads of dead plants which caused a huge amount of swearing.

On the positive side….I have had the vaccine, I can now make good bread with my new food processer and I have a customer due this morning. 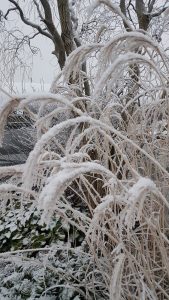