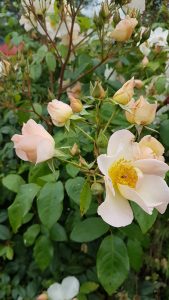 It’s such a long time since I last wrote here mainly due to being exhausted at the end of each day. This is not helped by sleeping badly but also trying to do the same amount of work I could easily do ten years ago.

It has continued to be busy. The ‘bundles’ of plants morphed into offering appointments for people to visit at set times so they could have the place to themselves and not have to worry about being to close to another customer. I’ve been amazed at the difference this way of buying/selling has been. Those coming here with an appointment have been focused and purposeful and have bought large quantities of plants. This has meant that more plants needed to be potted up regularly. I’ve lost track of how many Stipa tenuissima and Verbena bonariensis, V. rigida, V. ‘Bampton’ and V. hastata Rosea have sold. The ornamental grasses had been very popular as have many other plants.

I became aware that I was only getting the message through to local people via Facebook so made the huge decision to open the gate just on Fridays and Saturdays starting five or six weeks ago. I was quite apprehensive on that first day but all went well although there are a few people who forget to honour the social distancing guidelines. This week the gate will also be open on Sundays. The other days are for people with appointments. There are still many people who need to be extremely careful about going out and about, this terrible virus will be with us for some time yet.

As the restrictions began to be eased I began to take an odd day off to go to see my dad (in Cambridgshire) and my daughter (in Derbyshire). This was such a special thing the first times we met after a three month gap.For both of them their respective gardens have been so important for their health and well being.

The garden here is open again for the National Garden Scheme. Our visitor numbers are obviously down compared to other years but I’m hoping we shall see more visitors over the next few weeks when (in my opinion) the garden is at its’ best. The grasses are beginning to put up their seed heads, the late summer perennials are starting to flower and many of the roses are still in bloom.

In September there will be photos and a write up about Bridge Nursery in the Garden News magazine, do have a look if you can.